Lyme disease is a widespread tick-borne disease in the United States. It is caused by the spirochete (bacteria) Borrelia burgdorferi, which is transmitted to humans by the blacklegged deer tick (Ixodes scapularis) and the western blacklegged deer tick (Ixodes pacificus). The majority of cases of Lyme disease appear in late spring and early summer, but recently has been noted to take place year-round.

Erythema migrans (EM) is the characteristic rash that happens with Lyme disease. It develops at the site of the tick bite in approximately 80% of patients with early disease. EM usually disappears approximately 1-2 weeks after the infected tick detaches. Sometimes EM goes unnoticed because it ensues without any other symptoms, especially if the tick bite is in an area not easily visible to the patient. 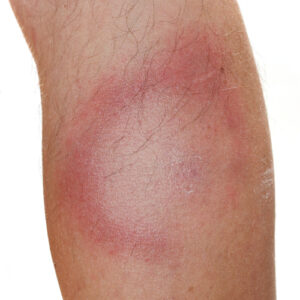 Individuals can also have other symptoms secondary to the rash including headache, stiff or sore neck, general feeling of being unwell, body aches and muscle pain. If left untreated, early disseminated Lyme disease can develop. In order to prevent Lyme disease, it is necessary to use tick repellents, including those that contain DEET, picaridin and permethrin. Repellents can decrease the risk of infection to tick and other insect-borne diseases.

If a tick is found on the skin, it should be removed promptly with a fine-tipped tweezer. It is a good idea to try and submit ticks for species identification. In New York, you can find information about submitting your tick here. In adults and children, we often give a single dose of doxycycline within 72 hours of tick removal, especially if the bite is considered “high risk”. High risk tick bites include those that occur in highly endemic areas, if the tick is identified as a species of Ixodes and if the tick was attached for more than 36 hours. Antibiotics have been shown to shorten the duration of the EM rash and they usually prevent the progression of Lyme disease.
Frequently, patients who are successfully treated for Lyme disease continue to have feelings of fatigue, joint and muscle pain and cognitive issues. Keep in mind that the first steps in preventing Lyme disease all year long are the use of repellents and early recognition and removal of ticks. Prompt treatment of Lyme disease usually results in complete resolution of the symptoms and can prevent more serious disease.